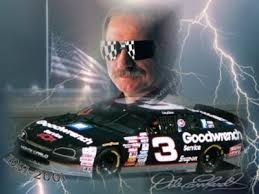 It was 10 years ago today that racing legend Dale Earnhardt Senior died while competing at the Daytona 500. It’s no secret that not every motorsports afficianado is a fan of the NASCAR scene, but there’s no denying the outright skill and presence that racers bring to the game both on and off the track. Nowhere was that more evident than with Earnhardt, who sprang from a long-line of circle track racers. Even if series fans rooted for a different driver, they respected Earnhardt for his down-to-earth nature and old-school approach to racing. When Earnhardt was behind the wheel, it was clear he wasn’t there to make friends or play nice. He was there to win.

While Earnhardt’s death was a tragedy on many levels, we can’t help but feel that NASCAR lost more than an icon when he passed. Today’s field is populated by overly polished, nameless media machines that lack the heart and human emotion that the old-timers brought to the table. Maybe that’s why we just can’t bring ourselves to flop down in front of the TV for 500 laps anymore.

For an excellent (and tear-jerking) retrospective on The Intimidator’s fatal accident, check out Dale Earnhardt’s Last Ride from ESPN.