There’s only one compact SUV that’s built for adventure, commutes and everything in between. The 2018 Ford Escape from Waldorf Ford does it all, and you can get it in 4 remarkable trims in Southern Maryland.

Choose between 3 innovative engines in the new Ford Escape. Its standard 2.5L 4-cylinder engine delivers an optimal balance of fuel efficiency and power for the average driver. However, if you need to tow a boat, camper or other heavy object, the available 245-horsepower 2.0L EcoBoost® engine may be right for you. Pair it with the Class II Trailer Tow Package to get a max towing capacity of 3,500 pounds. If a gas-sipping engine is more your speed, opt for the available 1.5L turbo EcoBoost, which offers an EPA-estimated 30 MPG on the highways of Southern Maryland.

You’re always just a simple voice command away from your friends in the new 2018 Ford Escape. Equipped with Android Auto™ and Apple CarPlay™, voice-recognition and available SYNC® 3 infotainment with touchscreen display, you can make hands-free calls, stream music, access mobile apps and much more.

The new Escape features the latest in cutting-edge safety technology. Available Lane Keeping System, Blind Spot Information System and Forward Collision Warning help you avoid impending accidents while on the road by alerting you or by taking active measures to prevent or minimize danger. Meanwhile, its standard backup camera makes backing out of your driveway or parking spot easier than ever before!

Not many people can say they own the debut model of a brand-new vehicle making its first appearance in the U.S. That’s what makes the all-new 2018 Ford EcoSport unique. While the new EcoSport has been transporting drivers throughout South America since 2003, this year marks the first time the subcompact crossover arrives in the United States.

Ideal for young drivers and city-dwellers, the 2018 EcoSport is the smallest SUV produced by Ford Motor Company. While the new EcoSport is smaller than other Ford SUVs, it is agile enough to get around the city and offers enough interior space for comfortable road trips.

Starting under $20,000 and priced less than rivals like the Toyota CH-R, Subaru Crosstrek and the Chevy Trax, the 2018 EcoSport near Annapolis and Clinton, MD will soon be available for lease or purchase at Waldorf Ford near Alexandria, VA.

Enough Power To Get Up And Go

The all-new 2018 Ford EcoSport comes in 4 trims and gives drivers 2 engine options. Choose from the standard 123-horsepower 1.0L 3-cylinder turbo and an available 167-horsepower 2.0L 4-cylinder with 4WD and a sport-tuned suspension. The base engine offers enough power to get around town and accelerates quickly enough to pass other drivers on the highways. For those wanting a bit more punch, the 4-cylinder option is also available. 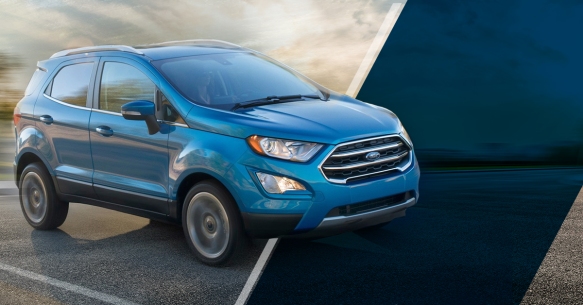 The 5-seat EcoSport offers subcompact SUV drivers a load of storage and cargo space. With a lot of space behind the second row, drivers will have plenty of room to store luggage, grocery bags or golf clubs. If more room is needed, drivers can simply fold down the 60/40 rear seat.

In the cabin itself, drivers and passengers will find plenty of nooks and crannies to store drinks, laptops, notebooks and smartphones in addition to its door pockets, center console and cooled glovebox.

The highlight of the 2018 EcoSport’s interior is its 8-inch, high-resolution touchscreen — the largest among all other subcompact crossovers. Drivers or a front seat passenger can also take advantage of state-of-the-art tech features like Apple CarPlay™ and Android Auto™, Bluetooth®, HD and satellite radio.

The 2017 Ford Escape is one of our favorite vehicles of all-time, and it’s been turning heads left and right, recently.

With the new, sleek and sporty style, and 21 city MPG and 29 highway MPG, the crossover is one of our top selling vehicles, and we completely understand why. 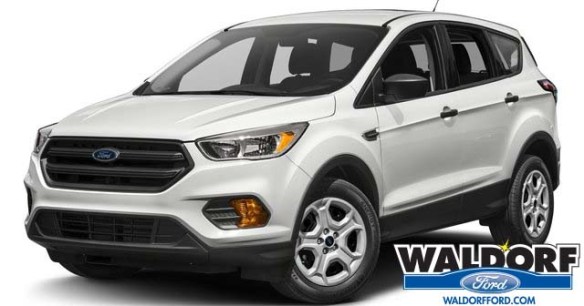 There are three trim styles available; the Ford Escape S, Ford Escape SE, and the Ford Escape Titanium. All three of the models include 6-Speed SelectShift, power windows and door locks, a storage bin under the floor, touch controls on the steering wheel, and flat-fold rear seats. In addition, a 6-speaker AM/FM radio with a CD player, MP3 and auxiliary input, as well as a communication and entertainment system are included on the Ford Escape.

The Base S Trim comes with a 2.5L, 4-Cylinder Engine with 168hp that gets an EPA estimated 22 MPG in the City and 31 MPG on the Highway. The SE and Titanium come standard with a 180hp 1.5-Liter EcoBoost engine, with an optional 245hp 2.0L EcoBoost I-4 engine available instead.

The two EcoBoost equipped Escapes come with Auto Start-Stop Technology which will help fuel consumption and vehicle emissions during city driving. The S Trim can only be purchased as a two-wheel drive but the other two models give you the option of four-wheel drive.

Also available is SYNC Connect, which allows you to start, lock, unlock and locate your vehicle from virtually anywhere using your smartphone.

Check out what your trade is worth, and then stop in and test drive one for yourself—you won’t regret it!